Australia is set to see a major drop-off in gold production as early as 2020, according to a new report from S&P Global Market Intelligence.

This provides the perfect opportunity for Aussie gold explorers looking to bring projects into production.

>> Scroll down for a list of ASX stocks with gold exposure, courtesy of leading ASX data provider MakCorp

Global gold production grew for a ninth consecutive year in 2017, reaching an all-time high of 106.5 million ounces, according to S&P.

But while the market intelligence firm sees global gold production increasing through 2020 to as much as 111.7 million ounces, the forecast is that Australia will peak next year and start a downhill slide.

“In the case of Australia, despite production being on track to hit a 26-year high of 10.2 Moz [million ounces] in 2019, we estimate that Australian gold production will start to decline thereafter,” said Chris Galbraith, an analyst at S&P.

“We are forecasting a 9 per cent fall year-over-year in 2020, and we expect the country’s production to reach a generational low of 6.8 Moz by 2022 – a 33 per cent drop within only three years.”

S&P attributes the anticipated decline to the short mine lives of recent start-ups and some significant mines approaching the end of their life. 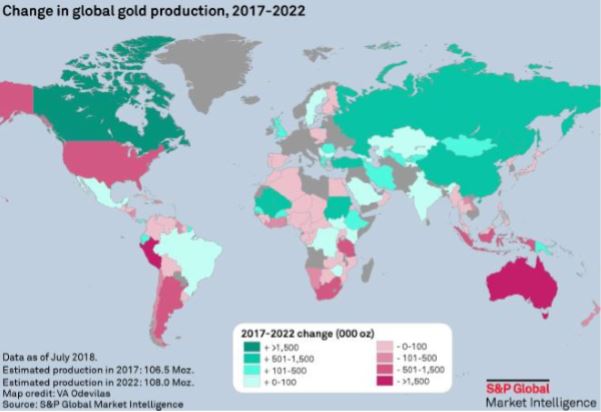 Which small caps can lend a hand?

Orminex (ASX:ONX) is the newest gold producer, announcing on Thursday that it had poured first gold at its 51 per cent owned Comet Vale project in the Goldfields region of Western Australia.

Shares hit an intra-day high of 19c – an increase of nearly 19 per cent – on the back of the news.

Orminex listed through the shell of South African gold producer Mintails in May and less than four months later has poured first gold.

Meanwhile, the past year has seen the Pilbara region of Western Australia become the target of a new “21st Century Gold Rush” that could potentially help fill the looming gap in gold production.

Artemis Resources (ASX:ARV) and its Canadian partner Novo Resources ignited the new gold rush when they uncovered what was described as “watermelon seed nuggets” south of Karratha at their Purdy’s Reward project in July last year.

Analysis of the nuggets later determined it was conglomerate-hosted.

This type of gold has proven difficult to drill in the Pilbara and has created concern in the market that it may not be economic to mine.

But Artemis chief Wayne Bramwell is confident that Artemis and Novo will find a viable way to mine the conglomerate-hosted gold – especially after Artemis this week received the remaining approvals necessary to start processing gold at its Radio Hill plant.

“The only missing part is how do we mine it economically – and that will happen,” he told Stockhead on the sidelines of an industry event in Perth this week.

“I can see ways that we want to test to mine this thing economically.”

Artemis and Novo are now assessing three or four different targets to determine which will be the first to be bulk sampled.

Novo chairman Quinton Hennigh told reporters at the recent annual Diggers & Dealers mining forum in Kalgoorlie, WA that he thinks Novo has uncovered the source of the region’s nuggetty gold.

Artemis has received approval to initially process 500,000 tonnes of gold ore at Radio Hill, but that will be expanded, according to Mr Bramwell.

“The next major expansion point is probably 750,000 tonnes per annum or probably a million,” he said.

Calidus Resources (ASX:CAI) has made a new discovery at its Warrawoona gold project in the Pilbara.

Drilling that was done 150m north of the current 654,000-ounce Klondyke resource returned high-grade gold starting at surface and extending down to over 100m.

The Klondyke‐style mineralisation currently extends over 1km of strike and remains open at depth, Calidus told investors on Thursday.

The news sent shares up 13 per cent to an intra-day high of 35c.

De Grey Mining (ASX:DEG) is closing in on a bigger gold resource in the Pilbara – where it already has over 1.2 million ounces.

And just 10 per cent of the shear zones have received detailed shallow reverse circulation and diamond drilling down to a depth of 100m to 150m.

De Grey is ramping up exploration in its drive to upgrade and expand the known resources, as well as discover new deposits.

While Western Australia’s goldfields have typically been a major focus for explorers, the hunt for gold in Victoria is now also gathering pace.

Chalice Gold Mines (ASX:CHN) is one of the three ASX-listed players that have the most prospective parts of the Bendigo goldfield stitched up.

Bendigo produced more than half the world’s gold for 40 years in the late nineteenth century, making it the world’s largest producer between 1850 and 1890.

But up until two or three years ago, it had taken a backseat in the hunt for gold in Australia.

The Victorian government estimates there is 32 million ounces of undiscovered gold in the Bendigo Zone beneath Murray Basin cover, where Chalice now has a ground position of some 3000 sq km.

Plenty of other players obviously see the potential of the gold space, with several new floats launched.

Perth-based gold and base metals explorer Caprice — which has only existed as a company since March and has no revenue — has two projects in the Northern Territory and Western Australia.

Also Perth-based, Golden State has projects in a gold mining district in the Murchison region, the Pilbara and near Laverton in the Eastern Goldfields.

Another gold hopeful, Kingwest Resources, will make its debut at 12pm AEST today after raising $5 million.

The company is exploring for gold and base metals in the Eastern Goldfields region near Leonora in Western Australia.

Scroll or swipe to reveal full table. Click on heading to sort