It's all moving so quickly. (X-Men Apocalypse/ 20th Century Fox)

“Beyond 2019, demand growth continues to look extremely healthy, making us believe that the one million ton per year lithium market may happen sooner than originally anticipated.”

The company also confirmed a few things along the way.

To put that number in perspective, an estimated 180,000 tonnes of LCE was produced globally in 2018.

After some initial delays, SQM’s language has changed.

Gone are the deadlines; SQM now says it will “continue to work to bring our capacity to 180,000 tonnes per year in the coming years”.

Sales volumes are now expected to be “slightly higher” in 2019.

If we’re talking about news that impacts the battery metals supply chain – this one is extremely significant.

It’s significant because the prevailing price differential between combustion engines and EVs is one of the only things holding back demand.

A $US35,000 price-tag makes the vehicle available to the next bracket of consumers.

Whether Tesla is making money at these prices remains to be seen but either way, the announcement could force other carmakers to follow its lead.

Also it has Dog Mode, which is very important.

Of the companies on our list, about 85 lost ground, 57 were ahead and 50 were steady this week.

The all-cash offer from $2.5 billion Chinese company Chengtun Mining values Nzuri at 37c per share, and management wants shareholders to accept it.

Nzuri told investors that the deal would “crystallise certain value” at a time when resources development projects – especially cobalt — faced “considerable funding hurdles and a range of market related and strategic risks”.

The offer was 42 per cent higher than the last closing price of 26c, and a 64 per cent premium to the 3-month volume weighted average price.

That’s still well down on the 48c high reached in mid-January last year.

Nzuri is developing the Kalongwe project in the Congo, which it calls “the most advanced copper-cobalt development asset on the ASX”.

“If Kalongwe was located anywhere other than the Democratic Republic of Congo it would be a genuine rock star, spinning off fat profits from its shallow orebody which has an average grade of close to 3 per cent copper and 0.3 per cent cobalt, material which is expected to cost less than $US1 per pound to produce,” Tim Treadgold wrote in December.

Lithium producer Altura Mining (ASX:AJM) jumped 28 per cent to 16c for the week, paring some of its massive share price losses over the past year.

“We now have a high-level of confidence that we can achieve nameplate capacity in the near future,” Managing Director James Brown says.

Here’s how that looks, chart-style: 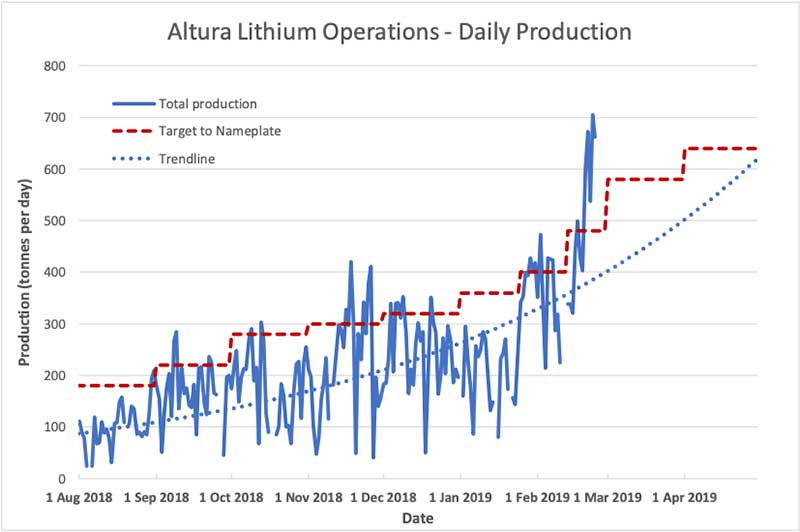