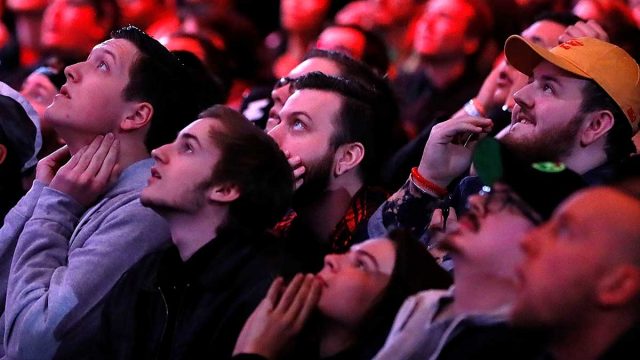 Is there money to be made watching other people play computer games?

Tournaments are regularly played in front of thousands of adoring fans for huge amounts of prize money.

ESH’s shares were suspended at 1.7c on Friday, pending an announcement. (ESH had no earnings in the June quarter, but spent $679,000, leaving $3.68 million in cash and equivalents. It expects to spend $540,000 in the current quarter.)

Now a second eSports provider is about to hit the local bourse as the burgeoning industry begins to take off in Australia.

London-based eSports platform Gaming Battle Ground is aiming to complete a backdoor listing on the ASX by the end of the year.

The eSports hype train is certainly picking up speed.

One research company says the global audiences will surpass 385 million people this year – that’s more than three times the amount of people that watched the Super Bowl this year.

Both eSports Mogul and Gaming Battle Ground describe eSports as a “global phenomenon”.

But what is the truth?

Is eSports a fad only for ‘true’ gamers? Or will it continue to grow and eventually surpass “real” sports?

The truth probably falls somewhere in the middle. eSports likely won’t surpass what we see as real sports, but it will become a mainstream part of society that will complement – and even partner with – traditional sports.

eSports is undoubtedly the real deal, and a lucrative space for businesses to be operating in.

While initial uptake has been a bit slow in Australia, 2017 was a landmark for the development of eSports here.

In May the Intel Extreme Masters event in Sydney’s Olympic Park attracted 10,000 punters to watch 40 professional gamers battle each other in a multiplayer first-person shooter game called Counter-Strike.

Around the same time, the Adelaide Crows became the first Australian professional sporting outfit to buy an eSports team.

“[eSports] is hugely popular with millennials and there are enhanced opportunities for current and new corporate partners to engage with younger, digital and social media-savvy audiences,” Mr Fagan said. “In many ways, eSports represents the intersection of technology, media and entertainment, which are all a key part of our strategic focus.”

This is where eSports becomes so lucrative – it provides access to the notoriously hard-to-reach millennial market in a place where they are passionate and engaged. Both Gaming Battle Ground and eSports Mogul want to capitalise on this.

Gaming Battle Ground provides an online gaming platform with the aim of bringing eSports tournaments to the masses. It wants to be a conduit to this young market for advertisers.

The company plans to list on the ASX through a reverse takeover of mining shell Arrowhead Resources.

Gaming Battle Ground has been operational for two years. It has 30,000 registered users and has run some 10,000 tournaments of varying sizes. Following the backdoor listing, the company plans to make inroads into Australia as an “emerging gaming and eSports market in a first world economy”.

To its advantage, the company owns all of the IP for its platform, and can readily expand globally, which is needed to compete in this online market.

It will follow in the footsteps of eSports Mogul, which brands itself as an eSports media company, offering training, a tournament platform similar to Gaming Battle Ground and content centred on the space.

At the time of listing it was yet to make any money, and this is expected to stay the same in the “foreseeable future” as the business builds its strategy. The company’s revenue model centres on subscription fees for users, partnerships with eSports team and advertising.

The company’s 20 per cent stake in eSports Hero lends it some credibility. The US-based company has hosted more than 20 live events in New York City that have been co-hosted by Microsoft and sponsored by the likes of Red Bull and Logitech.

It has also identified Australia and Singapore as jumping off points for the Asia-Pacific because “these countries will drive superior customer engagement and revenues” – greater than other areas in the region.

eSports is still very much an emerging industry, especially in Australia, and faces its fair share of legal challenges.

eSports Mogul has already run into some issues. Charging gamers to compete is prohibited in some States, and its service has been classified as gambling in others.

To get around this, the company introduced a monthly subscription for users.

Both eSports Mogul and Gaming Battle Ground list regulatory and legal issues as key risks in their respective prospectuses, and this will likely slow their growth in Australia.

Until eSports becomes a mainstream entity, further legal problems and regulatory hurdles may arise, but none is expected to stunt the industry’s growth in a major way.

With everyone from major sponsors to AFL clubs getting involved, growth seems inevitable.

Denham Sadler is one of Australia’s top technology journalists. Based in Melbourne, he writes a weekly column for Stockhead and has been published in The Guardian, ABC Online and The Saturday Paper.