Iron ore prices have rallied on supply concerns that more than offset falling steel prices and demand caused by the impact of the COVID-19 coronavirus outbreak.

The Dalian Commodity Exchange’s most-traded iron ore contract gained as much as 3.2 per cent to 619.50 yuan ($132) a tonne in morning trade after Brazilian iron ore major Vale slashed its production forecasts for the first quarter of 2020.

READ: Iron ore prices are down but is demand recovery around the corner?

Vale now expects to produce between 63 million and 68 million tonnes (mt) of iron ore in the current quarter, down from its earlier estimate of 68mt to 73mt due to heavy rains.

Despite this, the company left its full-year forecast intact at between 340mt to 355mt.

Vale did note though that its estimates didn’t factor in any second-order effects from the COVID-19 epidemic.

Further support for the seaborne price comes from restrictions on ground transportation in China, which affects the transport of raw materials from local mines to steel mills.

RBC Capital Partners noted that on the demand side, steel prices in China were weaker as the industrial sector was operating at lower levels due to many workers still not yet back at work.

However, inventory is starting to build at mills as blast furnaces are still operating.

Despite this, CRU still expects near-term iron ore prices to be weaker due to the impact of COVID-19 before rallying in the second half of 2020 due to government stimulus.

Here are some of the small cap companies with exposure to iron ore on the ASX.

Meanwhile, BCI Minerals (ASX:BCI) reported earnings before interest, taxes, depreciation, and amortization of $3.2m in the December 2019 quarter thanks to the royalties it receives from the Iron Valley iron ore mine in the central Pilbara region of Western Australia.

Fenix Resources (ASX:FEX) released a feasibility study in October 2019 highlighting the potential of its Iron Ridge project to produce strong returns over the life of the mine.

Fenix says the 1.25-million-tonne-per-annum Iron Ridge project will cost about $11.9m to build – almost half of which will be deferred until the first shipment is made – for average annual earnings before tax of $16.4m.

Other juniors with exposure to iron ore include Legacy Iron Ore (ASX:LCY) and Magnetite Mines (ASX:MGT).

NOW READ: Barry FitzGerald: 2020 could be the year for juniors with a continued strong iron ore price 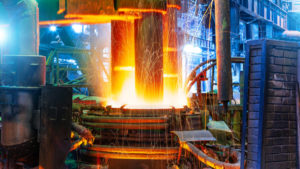