Adriatic Metals (ASX:ADT) may have only been allowed to drill a few holes at its Rupice polymetallic project in Bosnia & Herzegovina but it has handed the junior explorer its best ever gold and silver hits during drilling in the new licence extension area to the north.

“Whilst our drilling of the extensions of the Rupice mineralisation has been restricted to just a few holes to the north and south while we awaited Forestry approval for access, our results continue to confirm that the mineralisation continues north into the new licence extension area, and south towards our Jurasevac-Brestic prospect over an open strike length of 500m,” managing director Paul Cronin said.

“The delay has given us the opportunity to improve our drill coverage to provide a better understanding of the geotechnical and structural characteristics of our deposit which has greatly assisted our mining studies and the scoping study.”

Rupice mineralisation now extends over 500m of strike and remains open to the north and south, which means Adriatic hasn’t yet found the edges of the system.

Drilling is continuing at both the Rupice deposit and the Jurasevac-Brestic prospect.

Read more:
Base metals: It looks like there’s more high-grade zinc on the menu for Adriatic Metals

Back in Australia, Peako (ASX:PKO) has extended known copper-gold mineralisation at its East Kimberley project in Western Australia.

A 15-hole drilling program that was supported by a state government Exploration Incentive Scheme grant returned a top hit of 6m at 6.52 per cent copper, 27.27g/t silver and 1.16g/t gold from a depth of 93m at the Landrigan prospect.

Copper-gold mineralisation has now been defined over a 200m strike and is open along strike and at depth.

The company noted that the distribution of drill hits at Landrigan is broadly coincident with induced polarisation (IP) anomalism, which confirms the use of IP geophysical surveys to identify targets.

It will now seek to improve its understanding of the Landrigan prospect by carrying out field mapping, geochemical sampling, downhole geophysics and drilling to test the strike and depth extension of the current mineralisation.

Encounter Resources (ASX:ENR) has identified a suite of new copper drill targets at its Yeneena project in Western Australia’s Paterson Province. Independence Group (ASX:IGO) has the option to spend up to $15m to earn a 70 per cent interest in the project. 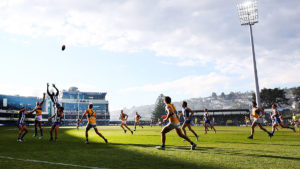