Carnavale Resources (ASX:CAV) is expanding its nickel sulphide footprint in the Kurnalpi region about 80km east of Kalgoorlie by exercising its option to acquire up to 80 per cent of Mithril Resources (ASX:MTH) tenement portfolio in the area.

It can earn the interest in the tenements, which are immediately adjacent to the Grey Dam nickel-cobalt deposit, by keeping the tenements in good standing and paying Mithril $250,000 in cash within a three-year period.

It now plans to integrate all previous exploration data and focus on targeting nickel sulphide mineralisation across the portfolio.

Exploration activities over the next 12 months are planned to include soil sampling, electromagnetic surveys and drill testing of priority targets along the two highly prospective sequences where existing electromagnetic targets and nickel sulphide style mineralisation have been demonstrated at both the prospect and regional scale.

Castillo Copper (ASX:CCZ) will soon start a systematic soil sampling program over high priority structural targets at its Mkushi project in Zambia. This will provide the company with some clues on where to focus the next part of the exploration campaign and potential drill targets. 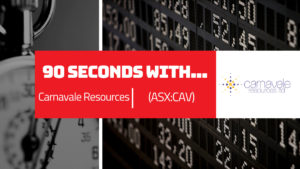