Visitors to Australia fell by 60 per cent in March compared to last year, the largest ever drop in arrivals.

Australian Bureau of Statistics data showed a fall in the number of people returning from holiday by 29 per cent.

China saw the steepest declines in incoming visitors to Australia, by 78 per cent, followed by Japan with 75 per cent, said ABS director of migration statistics Jenny Dobak.

Australia closed its borders to foreign nationals traveling from China at the start of February to prevent the spread of the COVID-19 disease.

It gradually tightened that closure to prevent almost all travel out of the country by Australians and incoming travel by foreign nationals. Prime Minister Scott Morrison says he’s unlikely to open the borders before 2021 but has been supportive of calls to start travel with New Zealand later this year.

Tourism will bounce back

However, countries will need to work together on solutions to ensure travellers do not restart infections, be that vaccinations or certificates to prove people are COVID-free, he told Stockhead.

In 2017-2018, China became the top source of international visitors to Australia, overtaking New Zealand and becoming a major source of business for several ASX businesses.

Daigou (‘buy on behalf of’) sellers AuMake (ASX:AU8) and Mediland Pharm (ASX:MPH) were building businesses around not only Chinese residents in Australia but organised tour groups being brought to their stores.

AuMake said on Monday it would start reopening stores in Australia and New Zealand, and earlier reassured investors that online sales had more than compensated for the loss of tour groups.

Mediland Pharm, which was in the early stages of launching an online strategy before the COVID-19 pandemic, relies heavily on tour groups. It saw quarterly receipts fall from $12.8m in the December quarter to $4m in the March quarter. 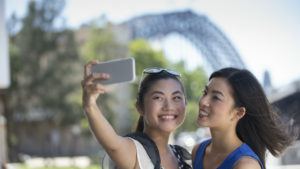