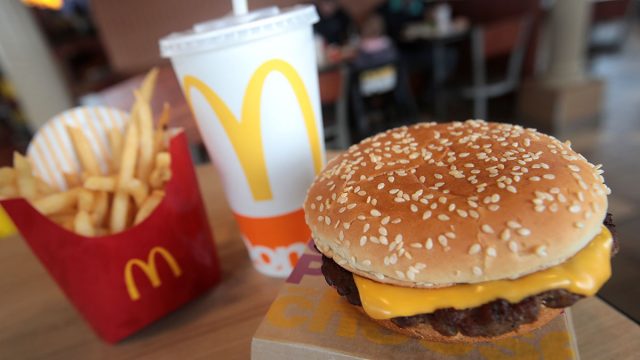 A quarter pounder meal at McDonald's.

Twelve years ago, fed up with eating junk on the way to Sydney, Jason Gunn opened the first of his organic fast food chain stores right next to a busy McDonald’s. Today, he’s taking over their old buildings.

“I remember the first day we opened. It was the 12th of August, 2005, just after 1pm. We opened in the same car park as the fourth busiest McDonald’s in the country,” Mr Gunn told Stockhead.

“I wanted to do that because I really wanted to know what it would be like going up against the big players.

“Within three months of opening we had our first $50,000 week. I remember then saying to my wife that we needed a proper kitchen. At the time we just had a kitchen in a shipping container out the back. That was when I knew we would be opening many more stores.”

Oliver’s Real Food (ASX:OLI) made its ASX debut in June after raising $15 million through an IPO at 20c per share.

It’s share price doubled in July, but has since collapsed back to its issue price after a profit downgrade last week. The company is now expecting a loss of $3.2 million compared to a forecast loss of $2.4 million in its prospectus, due to lower-than-expected sales and delays in new store openings.

With about two dozens stores on highways across Queensland, New South Wales and Victoria, the company claims to be the “world’s first certified organic fast food chain” and offers a menu of chia pods, salads and pita pockets including vegan and gluten-free options.

Last month, Oliver’s announced its newest site acquisition – a property on the Bruce Highway in Maryborough, Queensland which was originally built as a McDonald’s restaurant.

“We’ve rebranded two Subways, we’ve rebranded a Red Rooster. This is our first rebranding of a building that was built as a McDonald’s and it’s enormously satisfying. It really does feel like the world is changing,” Mr Gunn said.

Mr Gunn had the idea for Oliver’s while commuting between Port Stephens and Sydney twice a week for work, and complaining to his sister-in-law about eating McDonald’s along the way.

“It did my head in that all these highway food outlets were in the right spots, but I couldn’t understand why it was always ‘burger, fries and Coke’ or ‘pizza, fries and Coke’.

“She said: ‘If you’re so passionate about it, why don’t you do something about it and stop whinging?’… I went home and started writing down all these ideas and over a few months that became a business plan.”

The average transaction value at an Oliver’s outlet today is around $12 to $15, putting it slightly above your regular Macca’s order – a medium Big Mac meal in Melbourne costs $9.70.

However Mr Gunn says the premium pricing, for what Oliver’s calls “real food”, is actually key to the company’s success.

“We have in the past people had complain about the price and people say that we’re expensive,” Mr Gunn said.

“In the early days we used to be quite concerned about that. In fact in the first 18 months we actually lost a fair bit of money because we felt that to survive we had to be price-competitive with McDonald’s.”

Attempting to compete with the big outlets forced Oliver’s to raise its menu prices, which in turn actually lifted sales.

“We got to the point where if we didn’t start making money we weren’t going to survive. I had done everything I could to keep costs low and find efficiencies,” Mr Gunn said.

“But when we actually put the price up, it was a turning point. All of a sudden we started selling more and more of our salads. People started to see some congruency between what we were promising, and our price point.

“If you say you’re selling fresh, nutritious food for $6 they don’t believe you. But if you make it $12 they understand and believe.

“We can never compete with the likes of McDonald’s and KFC on price because we just don’t have the scale, but if we compete on quality we can win every single day.”

That said, Mr Gunn knows that there will always be people who prefer a greasy meal on a long drive, or those who simply don’t want to pay more than they have to.

“We cannot be all things to all people. These days if someone comes in and says ‘you’re outrageously expensive’, we say ‘you must be in the wrong shop’.”