Tourist hotspots, such as Lake Ashi in Japan, are feeling the pinch; but the global economy is feeling it too (Picture: Getty)

Investment bank UBS reveals how it thinks the coronavirus will hit stock earnings and economic growth – and even the base case is not pretty.

In a conference call yesterday morning UBS analysts  revealed it had forecast negative growth for this quarter. It also thinks there’s potential for another negative quarter if things did not improve.

Tharenou says  even this is based on an “incredible optimistic” scenario.

“My assumption assumes only a direct negative impact of a fall in Chinese visitor arrival of 30 per cent in the first quarter and then an immediate resolution with no other impacts – that’s incredibly optimistic now,” he said.

“By itself, just that 30 per cent decline in inbound Chinese arrivals or export services is enough to make growth negative.

“If it persisted into the second quarter you’re looking at a recessionary scenario.”

While investors and economists presumed next quarter would see a rebound as restrictions in China eased, Tharenou thinks this is at risk now.

“The problem now is outside China – it’s the a global supply chain dynamic,” he said.

“It just shows you how far away the economy is operating from a normal level of activity,” Tharenou said.

The bank argued if global PMI fell to 47 – that would result in an 8 per cent hit for global stock market earnings in global terms. That is purely in line with the index’s relationship to China and assuming it recovers to 50 by the end of the year.

If PMIs declined to 40, equivalent to the drop seen in China, earnings could fall by 26 per cent. Equity prices would follow suit to the tune of 20 per cent.

UBS said the economy needed stimulus even before this outbreak. But monetary policy doesn’t have much room to move, with interest rates globally near (or at) zero.

The Morrison government had previously said it would deliver the first surplus since the Howard era. Tharenou thinks it now it has to stimulate demand with fiscal policy.

Through fiscal and monetary policy the hope is people respond by spending even if it means taking up credit.

“Clearly the longer it goes on it’ll go from a supply shock to a demand shock,” he said.

“Fiscal policy will be increasingly be relied on – the [Morrison] government comments have shown it has been backing away from the surplus and to stimulus.”

Tharenou predicted it be softer than the GFC stimulus, likely to be tax cuts rather than cash handouts. 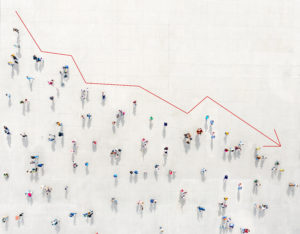