More than half of Americans think crypto is ‘the future of finance’: StarkWare report

The crypto industry has its fair share of detractors in high places globally, but new data released this week suggests belief in the asset class is on the rise in the US.

StarkWare, which pioneered the use of “zero-knowledge proof rollups” tech designed for Ethereum layer 2 scaling, has released a survey report that highlights attitudes towards crypto in the world’s biggest economy.

And, as you might have gathered from the article’s headline, there are positive takeaways.

The survey, conducted by OnePoll on behalf of the Israel-headquartered StarkWare, questioned a national sample of 2,000 American adults. It was conceived by StarkWare to mark the launch of StarkNet, a new layer 2 scaling platform that aims to make crypto apps “as widespread as smartphone apps”.

• Crypto will be “the future of finance”, according to 53% of respondents. 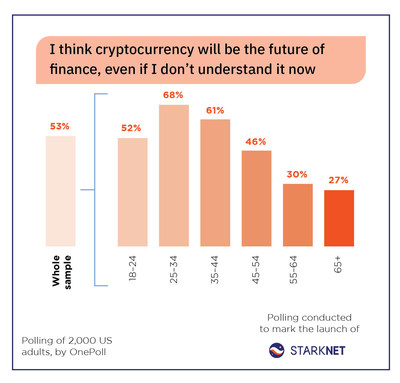 • Almost one in five respondents – 17% – said they’ve invested in cryptocurrency, and that rises to 28% among the 25-to-34 demographic.

• About 82% of those who’ve invested have at least one crypto tracker on their phone. And half of them say they “fiddle or amend” their holdings daily, while 27% of investors do so several times a day. 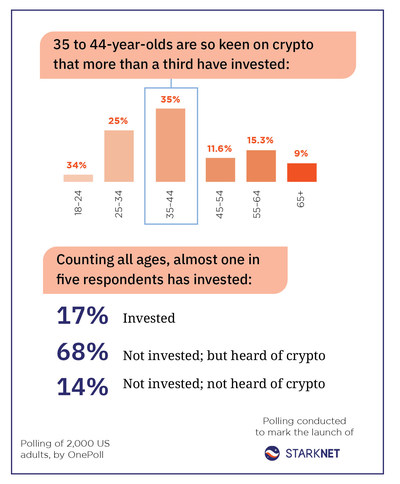 • The data also showed high recognition of crypto-specific terminology, with more than 40% of participants recognising terms including “Binance” and “blockchain”, while 34% have heard of NFTs.

• Even more obscure terms, such as “The Flippening” were recognised by 17% of respondents.

“This poll shows how widespread crypto has become, while indicating just how huge it will soon become,” said Eli Ben-Sasson, co-founder and president of StarkWare Industries, adding:

“We see that young Americans, those who will soon shape the economy, are especially tuned in to crypto. It’s an important insight that they are investing in large numbers, and overwhelmingly convinced crypto will be ‘the future.”

The poll also showed that environmental concerns around blockchain – a hot topic, particularly in America and Europe – are widespread.

Just over a third of respondents (34%) said that reducing the carbon footprint of cryptocurrency is important to them, and would make them more inclined to use it. For the 25 to 34 and 35 to 44 age groups, the figure rose to 49% and 39% respectively.

Asked about NFTs, 38% of respondents apparently said they would be “excited” to use them if they were sustainable. Among people aged 35 to 44, 52% were excited by the prospect of sustainable NFTs.

Commenting on this, StarkWare’s cofounder Uri Kolodny said: “We expected to detect concern over crypto’s carbon footprint per transaction, and enthusiasm for reducing it — but not to the massive levels we found.

“We were pleasantly surprised that people seem to understand the environmental challenge of crypto.”

Kolodny also highlighted the benefits of StarkNet in the context of reducing the crypto industry’s environmental impact:

“Our scaling tech massively reduces the electricity use per transaction, and will complement other initiatives that are underway to address crypto’s overall environmental impact,” said the co-founder. “The power normally used to mint a single NFT can cover the minting of around 12,000 via StarkNet.”