How ASX defence stocks have been performing over the last 12 months. Picture: Department of Defence.

Alcidion (ASX:ALC) was last week selected as a preferred provider for the Australian Department of Defence (DoD).

The company was selected as part of a consortium that will provide data capture services for the Department’s healthcare IT project.

Specifically, Alcidion will support the Department’s Healthcare Knowledge Management (HKM) System, a project which seeks to deliver a system that records, stores, and analyses health information for the Defence population.

The potential value of the contract will be approximately $21 million over 5.5 years.

The contract is just one example of DoD’s long term strategic plan to modernise Australia’s military.

Based on the 2020 Defence Strategic Update, the government is aiming to increase military spending from the current 2 per cent of GDP (or $42 billion), to 3.5 per cent over the coming decade. This represents the highest level since Australia’s involvement in the Vietnam war in the late 1960s.

The increase in defence budget also comes as former Australia’s defence minister, Christoper Pyne, warns of a potential conflict with China in the Indo-Pacific region over the next five to ten years.

Against this backdrop, ASX-listed defence stocks have been vying for a piece of the action, and a slice of that mammoth budget spend.

Stockhead has compiled a list of defence-related stocks on the ASX, and their performances over the past 12 months.

As seen from the table, defence stocks are not all about hardware military manufacturers.

The diverse list consists of seemingly unrelated businesses like software and medtech companies, such as Aldicion –  who happened to be the standout performer, returning 95 per cent in the last 12 months.

Other small caps on the list that have done well include Kleoss Space (ASX:KSS). This is a space-based Data-as-a-Service company that has gained attention over the last few months. The company sells data from its satellites to mainly government customers.

Kleoss has so far launched two satellite missions, one in November 2020 aboard India’s space mission, and another one last month aboard the SpaceX Falcon 9 rocket. It’s currently planning its third mission, also aboard a SpaceX rocket, in December 2021.

Brainchip (ASX:BRN) is an AI-based tech play that has also done well. The company is currently focusing on its neuromorphic processor chips for use in edge AI devices. Although immediate application is for electric vehicles, the chips could also be used in aviation and marine computers used in defence.

Elsight (ASX:ELS) manufactures the Halo drones, which provide real-time data, video and audio transmission over long distances. In July last year, the company secured US FCC certification which enabled it to sell drones to main street consumers in the US. The company has also signed a deal with the Israeli defence department.

Electro Optic Systems (ASX:EOS) is another defence performer and has just announced a major breakthrough in its laser technology. Its Guide Star Laser technology allows high speed optics to form laser beams that can track and move space debris at lower altitudes. This product will have obvious practical applications to the space warfare industry of the future. 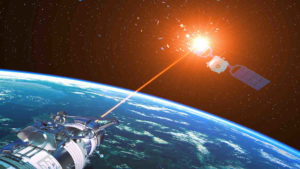