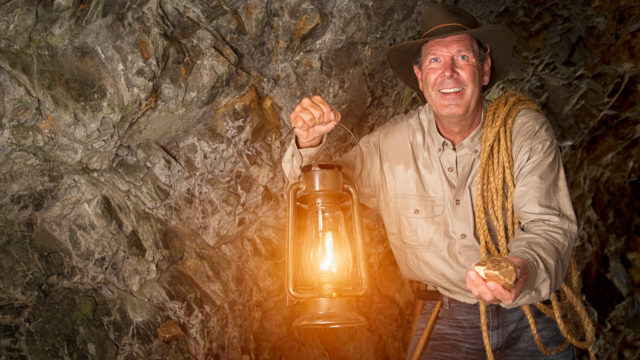 Meeka Gold is striking ‘bonanza’ gold grades in drilling at its Murchison gold project, which is looking very robust heading into a major pre-feasibility study.

Drilling by Meeka (ASX:MEK) at the 1.1Moz gold project near Meekatharra in WA has struck grades of up to 63g/t, with widths of as much as 51m.

Some of the best results have been delivered in eight holes targeting a zone between 200-250m below surface and Turnberry Central, beneath the base of the open pit shell for the Turnberry deposit outlined in Meeka’s December 2021 scoping study.

Absolute rippers. That’s not even taking into account results from hole 21TBRCDD026, one of eight Turnberry holes to still be assayed with bright specks of visible gold in the core.

That nuggety style of visible gold is rarely seen – gold is typically disseminated in other minerals and invisible to the naked eye.

PFS in the works

Ongoing drilling at Turnberry includes infill drilling around the western flank of Turnberry Central, where shallow high grade gold outside the existing mineral resource of 610,000oz at 1.7g/t was intersected in RC collars above the diamond holes including:

This is all looking promising ahead of a pre-feasibility study building on last year’s scoping study which is still on track for release in September.

“These fantastic results, which sit outside of the 2021 Scoping Study open pit design, highlight the opportunity we see to grow our Murchison Gold Project,” Meeka MD Tim Davidson said.

“Excitingly, outside the broader zones of gold, we are seeing ‘bonanza’ grades and an excellent example of visible gold in hole 26 for which assays are pending. On receipt of the remaining assays, we will re-evaluate the Mineral Resource for Turnberry.

“In addition, we continue to drill out a number of high priority targets at St Anne’s and Turnberry that sit outside the Mineral Resource.

“This drilling is focussed on extensions of strike and depth, and these results will also form part of the next Mineral Resource update. First assays from this drilling are expected in late July 2022.”

Drilling still on the menu

While Meeka patiently awaits the results of the holes that struck that tasty looking visible gold, drill rigs continue to turn.

The gold mineralisation at Turnberry strikes over 1.5km and sits within a fertile 7km gold shear system.

That also includes the St Anne’s prospect, which is not yet included in the mineral resource and where 6000m of drilling has been completed since early June.

At its Circle Valley rare earths project near Esperance, Meeka is also waiting on assays from the final 13,796m of a drilling program searching for high grade rare earths resources.