ASX to fall as Russia ups the ante on Ukraine

Experts said the move is a pretext for moving his troops into Ukraine territory, as French President Macron called for an immediate “targeted European sanctions” against Russia.

Russia has launched a meme war against Joe Biden and CNN https://t.co/zYRmUcw9sG

Wall Street was closed for Presidents Day, but US stocks futures were all trading much lower, down by almost 2%.

Investors moved back to the safety of gold, pushing the precious metal above US$1,900 once again to US$1,904/ounce.

And while it may not be as interesting as GameFi or cartoon apes that sell for $500k, crypto taxation is an important topic for investors in this space to get their heads around.

Coinhead’s Rob Badman breaks down how to prepare your crypto tax with specialist H&R Block Australia.

The ASX 200 index looks set to follow European stocks lower this morning, with futures markets (March contracts) pointing down by 1.16% at 8:30am AEDT.

Yesterday, local shares began in negative territory but rallied when the news broke out of a potential Biden-Putin summit, finishing the day 0.27% higher.

Later today, ANZ and Roy Morgan will be releasing their weekly survey on consumer sentiment, while the Commonwealth Bank will be issuing weekly credit and debit card spending data.

In large caps this morning, Coles Group (ASX:COL) said its first half earnings were hit by COVID-19 disruptions. Coles’ revenue rose just 1% (on pcp) to $20.8 billion for the half, while  profit declined 2% to $549m.

Regis Resources (ASX:RRL) reported an underlying net profit of $44m for the half,  on the back of an  18% increase in revenue to $488.8m. The gold miner also said it expects a stronger second half, as increased gold grades at its Duketon mine come into production.

Peter Warren Automotive (ASX:PWR)
The company’s underlying Profit Before Tax was $36.3m, up 35% on prior year. The company also declared its inaugural interim dividend of 9 cents per share, fully franked.

Doctor Care Anywhere (ASX:DOC)
DOC said its agreements with AXA Health have been varied such that its share of revenue generated from this service will be paid directly to Doctor Care. From the effective date of 1 April, this change will result in materially improved revenue and margins for DOC, whilst also accelerating the timing of cash inflows, it said. 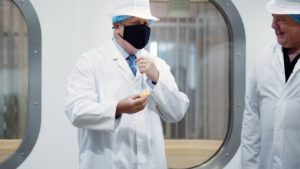